Go, go, go! At our skiff drivers urging, we slipped into the water as quickly and quietly as possible, in hopes of snorkeling with the pod of false killer whales that were hunting in the bay. Again and again we attempted to intersect their path, but our timing or positioning resulted in me seeing them in the fleeting distance or not at all. Finally, I was fortunate to have a member of the pod swim past just close enough to capture a few photos with my fisheye lens. At the end of our exhausting excursion, everyone on the panga had seen the false killer whales and a few lucky guests had the privilege to swim alongside a mother and her newborn. This was definitely one of the more exhilarating surface intervals I have ever experienced and an incredible bonus animal sighting on top of all of the manta rays, sharks, dolphins and huge schools of fish we had already encountered while diving. Welcome to big animal paradise!

The Revillagigedos Archipelago is comprised of 4 volcanic islands named San Benedicto, Clarion, Roca Partida and Socorro, which are situated southwest of Cabo San Lucas, Mexico in the Pacific Ocean. The latter also lends its namesake to the more commonly referred to Socorro Islands, for those of us that struggle to pronounce Revillagigedos. With the exception of a Navy installation on Socorro, which houses roughly 250 military personnel and their families, the islands are uninhabited. A liveaboard dive boat is the only way to see this vast frontier due to the islands isolated nature. Clarion is the most remote and as such is rarely visited, located 125 miles (200 km) past the next farthest island of Roca Partida. San Benedicto and Socorro Islands are close to one another and located roughly 240 miles (386 km) from Cabo San Lucas. The area is famous with scuba divers for the giant oceanic manta rays and other large pelagics that frequent the waters. The Revillagigedo Islands were pronounced a UNESCO World Heritage Site in July 2016 and the Mexican government created North America’s largest marine protected area and also declared it a National Park in 2017. The 57,000 square miles (150,000 sq km) of protected area bans fishing, mining and tourism development within and on the islands themselves.

Giant oceanic manta rays have a wingspan of up to 23 feet (7 m) and those around the Socorro Islands are some of the largest I have ever seen. They exhibit two different color variations, the black manta is nearly all black on both sides and the chevron manta has a patterned mix of black, white and grey on top and mostly white underneath. Each individual has distinct spots on their underside and like a human’s fingerprints; the markings can be used for identification. Regardless of their coloration, the mantas around Socorro seem to enjoy diver’s exhaust bubbles on their bellies and will hover in the water column over each diver in turn, giving guests the privilege of experiencing a “manta sombrero.”

San Benedicto Island is the closest in proximity to Cabo San Lucas and is typically the first anchorage after an overnight crossing. We arrived in time for a late afternoon checkout dive at Las Cuevas to knock off the rust and perform buoyancy and gear checks. Situated in a protected cove on the leeward side of the island, the site made for an easy first dive swimming amongst large boulders and caverns as we searched for lobsters, white-tipped reef sharks, baby porcupine fish and stingrays buried in the sand. We saw several Socorro chub swimming amongst the rocks; most of which are a lackluster grey in color but the remaining 10-15% of the population scream for attention as a vibrant yellow. The next morning we dove at El Canon, located near the anchorage on the backside of the island. The underwater topography consists of a horseshoe shaped, downward sloping rock structure, separated by a sand flat. Sitting at 90 feet, the main attraction is a cleaning station above a rocky pinnacle near the drop off to deep water. Here you can tuck behind the rocks and observe Galapagos and silvertip sharks swimming circular patterns around the formation while you wait for manta rays to arrive. We had at least one manta show up on every dive and were treated to hunting Pacific bottlenose dolphins chasing jacks in the dim early morning light of our first dive. Here is also where I saw my first black manta ray. I have swam with chevron and reef manta rays on various dives across the glove but had never been graced by the presence of a black manta ray. This beautiful creature snuck up on us as we were working our way down the rocky reef to the cleaning station. One minute I was seemingly alone with my thoughts and the next, I had a massive shadow gliding off my left shoulder. The camera came up out of reflex and I did my best to stay close but keeping up with a manta ray without the aid of external propulsion is pure fantasy and it easily disappeared into the distance. Happily, we were able to see several more black mantas over the course of our trip and I had numerous opportunities to improve on my first photo attempts. Returning to the boat after each dive, we witnessed several silky sharks near the surface and discovered hundreds of fish hiding below, using the overhead structure as a refuge. There were several schools of jacks of differing species, all staying in close-knit groups for protection against the silky sharks, who were keen for a meal but equally curious to inspect the divers in their midst as well. 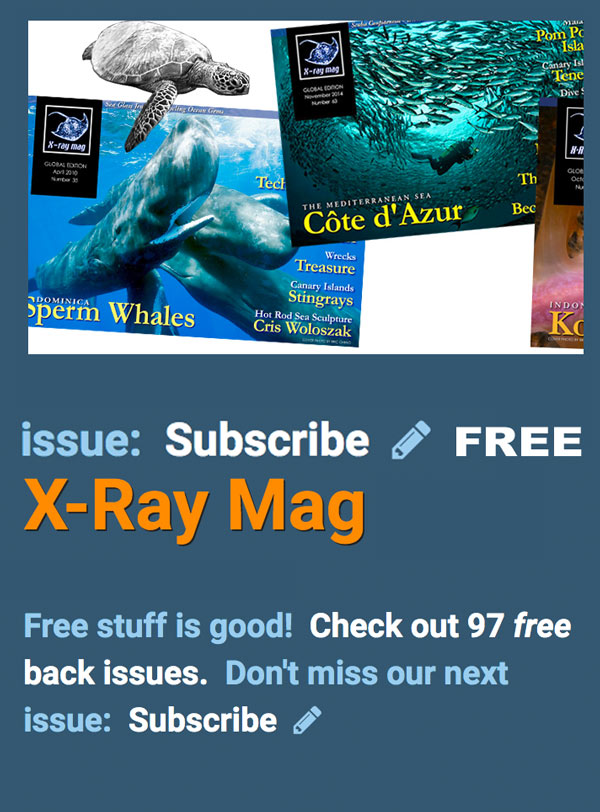