Edi Frommenwiler was a mechanic, long-distance lorry driver, then adventure tour guide for 10 years, before he decided to embark on the journey of his life and build a 38m long sailing ship in one of the world’s most remote places.

In the summer of 1990, Edi sat down in front of a computer for the first time. His brother Franz taught him the basics in AutoCAD drawings. After 1 month, this was the result! Edi had to visualize what Pindito would look like, and finally his dream began to take shape.

It was 1991 on the island of Pulau Laut off Kalimantan when he and his team dug a dry dock and on 31 March, laid the first timber keel of the Pindito.

Before crowd-sourcing became all the rage, Edi garnered support from friends and families, to fund the ship’s construction - despite having no previous expertise in ship-building. A team of 25 people endured ten months of hard work before the Pindito was first floated in January 1992.

Edi was attracted by West Papua’s wilderness and for 10 years his was the only tour boat in a region which is barely populated.

Raja Ampat has been referred to as Indonesia’s Galapagos. Scientific research expeditions, supported by Edi, have found a level of species diversity rivalling anywhere on Earth.

The islands were formed from old coral formations, atop limestone, that has been lifted above the seabed by geological processes. The dense network of currents and tides, undersea formations and islands, create an amazingly complex ecosystem.

Since his first dive, Edi has been particularly fascinated by the tiny creatures that live among the coral reef and its animals - Skeleton Shrimps, Nudibranchs, Hairy Octopuses and Pygmy Seahorses - and from up to four dives a day for the last 25 years, has amassed an unrivalled catalogue of film and photographs.

The diving and snorkelling in Raja Ampat is extraordinary. Gorgonian fans and soft corals reach the surface, where elsewhere they’d be in the depths. Currents from offshore attract giant Manta Rays as well as an incredible diversity of whales and dolphins.

There are between 80 and 90 species of whale and dolphin in the world. Indonesian waters have about a third of these and a quarter are seen in as little as one 12-day trip on the Pindito: Pan-tropical Spotted Dolphins, Spinner Dolphins, Fraser’s Dolphins, Sperm Whale, Blue Whale, Killer Whale, Melon-headed Whale, False Killer Whale and Beaked Whales, to name but a few.

“When I started in 1992, I saw dolphins in the area but had no idea there were big whales around in Indonesian waters”, says Edi.

“When I encountered the first whales, for me, it was a real ‘wow’ experience … in 1992. A very exciting experience”.

Despite spending his life on the sea, Edi never had time to watch them so he has the idea for a trip and was introduced to whale expert Benjamin Kahn, when he decided to see if he could combine diving and whale-watching together. It turned out to be a very successful idea.

“Nowadays we know we have Orcas and even Blue Whales in the area”, says Edi, I have seen Orcas 8-10 times in the Banda Sea and Raja Ampat. The reaction of the guests is like, Blue Whales, Orcas .. this is something very special! Even Sperm Whales … on every trip. We can hear them, and often see them”.

When we visit a place, we can look at it like a picture, in two dimensions.

When you visit somewhere with such depth (literally) and diversity, and do this with a passionate network of guides able to reveal secrets of the tiniest to largest inhabitants, culture and environment, numerous dimensions interweave to create a bewildering but magical fabric - experience isn’t about knowledge, it’s about getting to know a place.

This is why we are so excited to be leading trips with Edi. The first Wildiaries expedition to Raja Ampat sets sail in February 2017. Led by Sea Turtle Foundation’s Tim Harvey and Wildiaries’ Simon Mustoe, we’ll be joining Edi to experience Raja Ampat’s miracles of nature … seek out the tiny colourful inhabitants of Edi’s world, search for the largest predators that ever lived on Earth and discover birds of paradise. 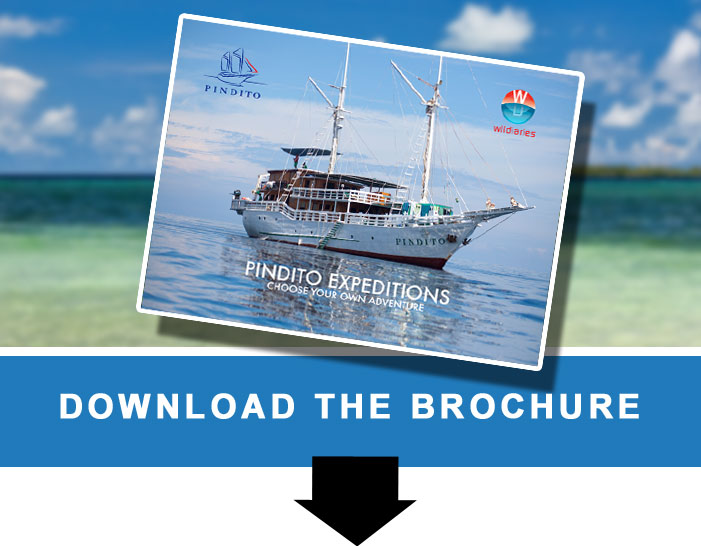